History of the Arkadi Races, the oldest sporting games started for historical reasons in Greece

The history of Arkadi Races began in 1930. The president of the Sports Association Atromitos, Lieutenant Nikolaos Zervos, decided to organise sporting events called “Panrethymnia” on the 8th November 1930 in commemoration of the holocaust in Arkadi Monastery.

Because during the same year there had also been organized commemorative events for the 100 years of independence of Greece from Ottoman rule and those events finished with the commemoration of the Arkadi Holocaust on the 8th November 1930 in Rethymno, it was renamed to “Arkadi Races”.

So, the “Arkadi Races” began unofficially in 1930 but the Sports Association also organized sporting events in 1932 and 1933 and since 1936 every year with SEGA’s (Athletic Athletics Federation) official approval, represented by Xirouhakis and Ν. Gagaoudakis).

The first official “Arkadi Races” were held on 8th November 1936 by the Rethymno Sports Club - AOR. In the pancretan races took part the following sports clubs: from Agia Paraskevi “Keravnos Club”, from Chania “Talos”, from Athens “Fokianos” and Rethymno AOR.

The races took place on the streets of Averof Square (today Iroon Polytecnhiou Square). The athlete Piskopakis Andreas read the oath and AOR’s president Manousos Chatzigrigoris gave a speech to welcome the athletes of the 1st Arkadi Races. He praised the young people who left the kafeneia (local cafés) and participated in the races to be awarded a laurel wreath and to honour those who heroically gave their lives in 1866 in the Monastery of Arkadi.

Then, Prefect Krevatas declared open the 1st Arkadi Races from Arkadi. For the 70th anniversary of the holocaust in Arkadi in Rethymno, Prime Minister Ι. Metaxas arrived at the Monastery of Arkadi for the doxology attended by Archbishop Athanasius. He later baptized the 10th child of M. Anastasakis from Gavalochori giving him the name Konstantinos-Arkadios. After lunch, he visited the Museum of the Monastery, rode back to Amnatos and then to Heraklion. 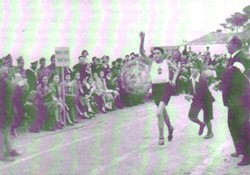 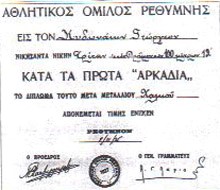 The running hero was D. Mavrakis from the village of Sises; all spectators clapped as he was entering the stadium. After the end of the 1st Arkadi Races medals were given to the top athletes.

The athletes from Chania were awarded 5 gold medals and the athletes from Rethymno 3 gold medals, 9 silver medals and 8 bronze medals. The next Arkadi Races were held in 1937 with the participation of 6 sports clubs from West Crete. D. Mavrakis finished first again the Arkadi Run and third finished L. Koronakis.

In 1939 were held the 4th Arkadi Races. They were cancelled during the Second World War and they continued after 1945 until today.

The above information was taken from the book “Athletics in Rethymno” written by Lefteris Kriovrisanakis.